Women and txakoli. Round table and tasting 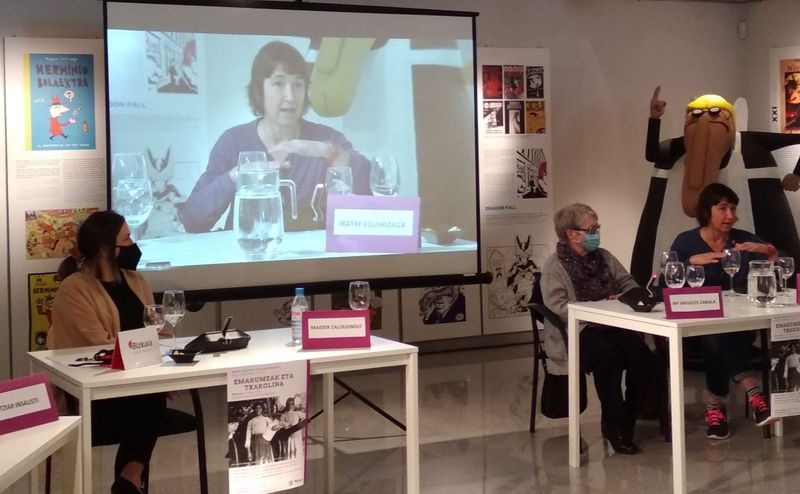 16 Mar Women and txakoli. Round table and tasting

On the occasion of the celebration of International Women´s Day The Museum of Txakoli – Txakolingunea, of Bakio, with the collaboration of the D.O. Bizkaiko Txakolina organized a round table on March 13 where five women from different fields participated, winegrowers, sommeliers, winemakers… who told us about their experiences in the world of txakoli.

In recent years we have witnessed a growing presence of women in the world of wine. It is worth noting, how women go from being their co-stars to their protagonists.

Three decades ago in Bizkaia there were practically no winemakers, but women have always been linked to the work of the farm and of course, of our wineries. This inheritance may have helped the presence of women in a world in which men have been the main protagonist to continue to grow. In Bizkaia today we can find four women in charge of wineries, three independent winemakers who make great txakolis, others linked to projects in specific wineries, some winemakers who follow the path opened by women like the Zabala sisters and generational relays with young people promises on the way.

Fortunately, the evolution has also been very remarkable in the case of sommelier, where until 15 years ago it was very difficult to find a woman. Today it is common to find women managing restaurant wineries and it is they who recommend wines or prepare menus for restaurants. The sector feeds on the know-how and extensive knowledge of the world of wine of great women who spark their senses and their emotions, because wine is also emotions and helps to share and expand the value of txakoli.

The round table moderated by Maider Zalduondo, in charge of promoting Bizkaiko Txakolina, had the participation of five women closely related to the world of txakoli.

Alaitz Galán, sommelier and above all a wine lover. Runner-up best sommelier in the Basque Country in 2015 and 2016. A lover of her work, and explorer and tireless. On her Instagram profile, Sobria in moderation promotes actions to support the hospitality industry and local products. Diploma gourmet.

Elena García, in charge of the Ardoatek laboratory, offers oenological advice to several wineries in the D.O. She presents a section dedicated to winery management from a technical point of view, integrating quality, environment and prevention, and works with different styles. A woman eager to launch into the creation of new creations.

Iratxe Zabala at the helm of the Zabala Winery and taking the witness of the fourth family generation making txakoli, an activity that her husband Igor´s great-grandfather began in the Basigo family farmhouse. The family winery was also where they started and took over the reins of the txakoli-activity in 2004. They grow grapes from Hondarrabi Zuri, Riesling and Hondarrabi Beltza, among which we can find vineyards with more than 100 years old.

Itziar Insausti is part of the Doniene Gorrondona winery team. Without having a family tradition, they became fully involved in the wine recovery of Bakio at a time of massive abandonment of the vineyards in the area. Today her winery sets trends in the DO and makes great txakolis.

A round table, where in addition to enjoying an interesting morning talking about the evolution of the role that women play in the world of txakoli, they also tasted a young txakoli, a txakoli aged on lees and a red txakoli.