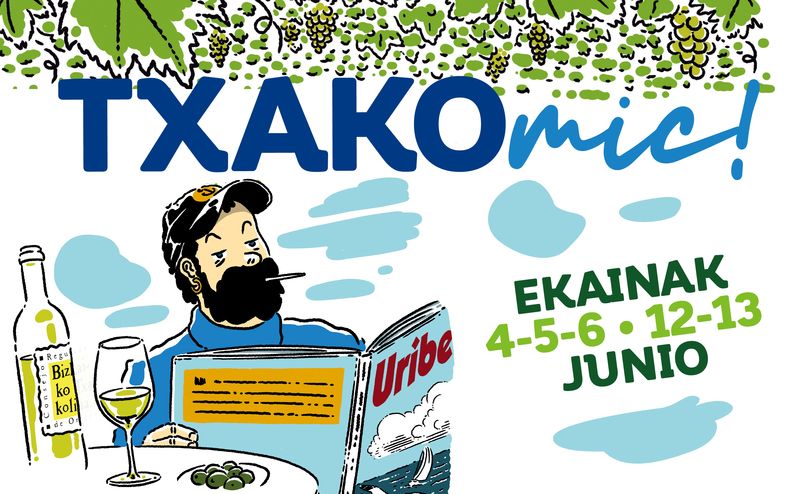 20 May Txakomic: Txakoli and comic, a refreshing pairing

Posted at 17:43h in Sin categoría @en by bizkaikotxakolina
Share

Pairing is the process of putting a meal together with the drink that best matches it. In the field of catering, pairing normally refers to food and wine combinations and the sommelier is in charge of recommending the combinations to diners.

For the occasion, we are going to try new pairings, in this case between txakoli and comics, two media that are experiencing constant renewal in our times.

Surely many will think that it is a curious association, but the truth is that they are related from the same etymological origin, since the word vignette comes from the French ‘vignettee’, diminutive of ‘vigne’ which means in Spanish vine, whose origin in Latin is vinea.

During the first two weekends of June, the Txakolingunea Museum in Bakio and Mendibile Jauregia become meeting spaces in which txakoli and Basque comics become the protagonists. Anyone who wants to have a good time and participate in the different activities, which will take place from June 4 to 13, at Txakolingunea in Bakio and Mendibile-Leioa, will have to register in advance at this link: REGISTRATION

A sound immersion in the acoustic universe of the Txakoli vine. A unique experience that unites the sounds from the earth with new technologies and Artificial Intelligence. Includes tasting of two txakolis.

A tour of the most extensive exhibition on Basque comics with its authors. Includes tasting of a txakoli and pintxo.

Gyotaku is a traditional Japanese engraving system that graphically captures the soul of fish through its printing on paper. The cartoonist Rober Garay makes a demonstration of this art while the Txoko Mendibile will offer a pairing of txakoli and three pintxos made with these fish. During Txakomic an exhibition of gyotakus made by the author can be seen in Mendibile. Includes tasting of three txakolis.

A very special tasting in which we will discover the red Txakoli while our cartoonists perform a live performance using the same Txakoli to draw. Includes tasting of three red txakolis paired with different cheeses.

A walk through the history of Txakoli at the Txakolingunea Museum that concludes with a very special tasting. Includes tasting of two txakolis paired with anchovies.

While our cooks develop the recipes, the cartoonist Asier Iturralde simultaneously executes an explanatory comic. Includes tasting of the resulting recipes with a tasting of three txakolis.

Enjoy a commented tasting of txakolis while the well-known cartoonist Daniel Castelló makes a portrait of you to remember the moment. Includes tasting of four txakolis.