Txakomic, the initiative that brings together txakoli from Bizkaia and Basque comics, celebrates its second edition from April 2 to 10 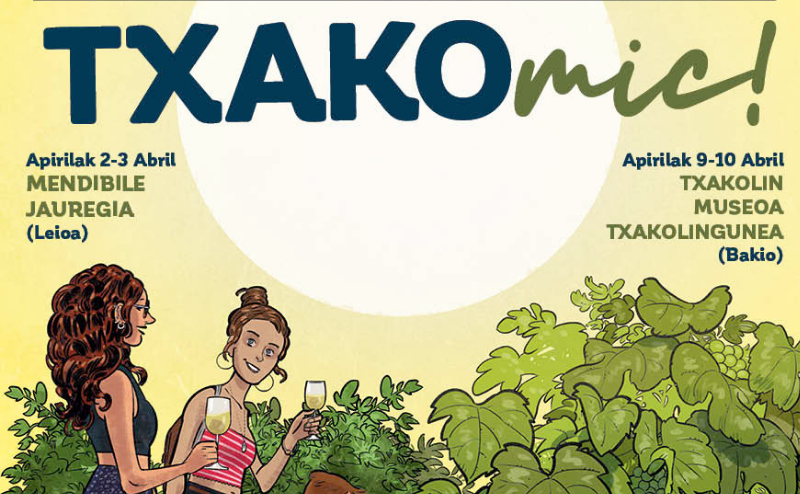 22 Mar Txakomic, the initiative that brings together txakoli from Bizkaia and Basque comics, celebrates its second edition from April 2 to 10

Posted at 11:56h in Sin categoría @en by bizkaikotxakolina
Share

Wednesday, March 16, 2022. The Txakoli-Txakolingunea Museum and Mendibile Jauregia will once again be the scene of the Txakomic initiative, which combines the tradition of txakoli and Basque comics, in a marriage between the wine-growing tradition and the culture in our territory. This second edition will take place the first two weekends of April with a program of activities that complements the rest of the blocks in which this project is articulated: the edition of the book ‘Historias con txakoli’ and the publication of another book in a comic version which will also tell the story of txakoli from Bizkaia.

The second edition of this project was presented this morning in Bilbao, in a ceremony attended by the Deputy for Sustainability and the Natural Environment, Amaia Antxustegi; the president of Jata-Ondo, Ion Gorka Elgezabal; the manager of Bizkaikoa (the public company that manages the 26 regional museums), Asier Madarieta, and the director of Culture of the Provincial Council of Bizkaia, Begoña de Ibarra.

The initiative, which arises from the collaboration between the Txakoli-Txakolingunea Museum, the Mendibile Jauregia Association, the Regulatory Council of the Bizkaiko Denomination of Origin
Txakolina and the Rural Development Association of Uribe, Jata-Ondo, is inspired by the ‘Komikia’ exhibition that hosted the Bakio Txakolingunea. Thus, the project arose last year as a result of the union process between the txakolinera tradition of Bizkaia and the art of Basque comics, with the aim of showing citizens new pairings, in this case between the most characteristic wine of our territory and the drawing.

Activities for all audiences

The program of activities organized for this second edition of Txakomic will start on the first weekend of April in Mendibile Jauregia (days 2 and 3) and will end on the second weekend of week (days 9 and 10) in Txakolingunea de Bakio.

Children’s workshops, commented tastings in which comics will be presented by different cartoonists, fusion between music and drawing, screenings of short films in which they will develop commented tastings, or an illustrated cooking show in which while the chefs prepare the recipes, a cartoonist will create surprising stories with the ingredients. These are some of the activities organized so that both children and adults can enjoy this pairing between txakoli and Basque comics.

To register for these activities, a website has been set up: uribe.eu/ms.

Parallel to these activities, Txakomic continues with the publication of the two publications on which work began to coincide with the launch of this project.

The first of these, ‘Stories with txakoli’, will include five bimonthly comics that have been published in May, August, October and December of last year and February of this year, and another two that will see the light of day in April and June of this year. All these stories have txakoli as the protagonist and are published individually and chronologically at www.bizkaikoa.bizkaia.eus and www.bizkaikotxakolina.eus. They have a single scriptwriter, Mikel Begoña, but they are drawn by different illustrators, which will show a very varied graphic result. The volume with the seven chapters will be published in December of this year and will help transmit the nature of txakoli to other generations.

The second of the publications is the book ‘Historia del txakoli’, which will also be published in December of this year and will try to reflect through comics, in a fun but historically accurate way, the evolution of txakoli from its beginnings to the present day . This publication will form part of the Txakoli-Txakolingunea Museum.