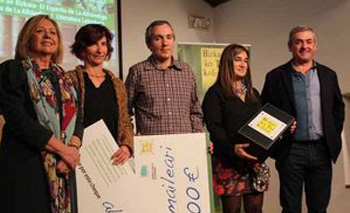 Posted at 12:08h in Sin categoría @en by trek
Share

On 12 November, in Mendibile, the prizes of the First Literary Short Story Contest of “Txakoli of Biscay – The Spirit of the Alhóndiga” were given out. The winner in the Spanish language category was María Ángeles Carretero, with her work “Un faro diminuto” (“A tiny lighthouse”). The runner up prize in this category was awarded to José Antonio Otegui for “De cómo los de Abadiano salvaron el txakoli”. (“How the people of Abadiano saved the txakoli”).

In the Basque language category the winner was Oskar Azkona with his story “Antzeta izan nintzen” (“I was Antzeta”). The runner up prize was awarded to Idoia Barrondo with her work “Txakolinerue”.

The first two prizes had a monetary value of 600 Euros each, whilst the runners up each received prizes which comprised of oenologist kits.

50 original works, 45 in Spanish and 5 in Basque, from Spain and several Latin American countries were submitted to the first Literary Contest “Txakoli of Biscay – The Spirit of the Alhóndiga”.

During the event held on the 12th, the actors Juan Viada and Carmen Pardo read several paragraphs of the winning stories.

Iñaki Aretxabaleta, Chairman of the Regulatory Council of the A.O.C. Bizkaiko Txakolina (Txakoli of Biscay), and Sol Aguirre, Chairperson of the Spirit of the Alhóndiga, presented the prizes to the winners.

The four winning entries and a further six which according to the jury are worthy of publication have been compiled in a book published by two of the organisers of the contest.