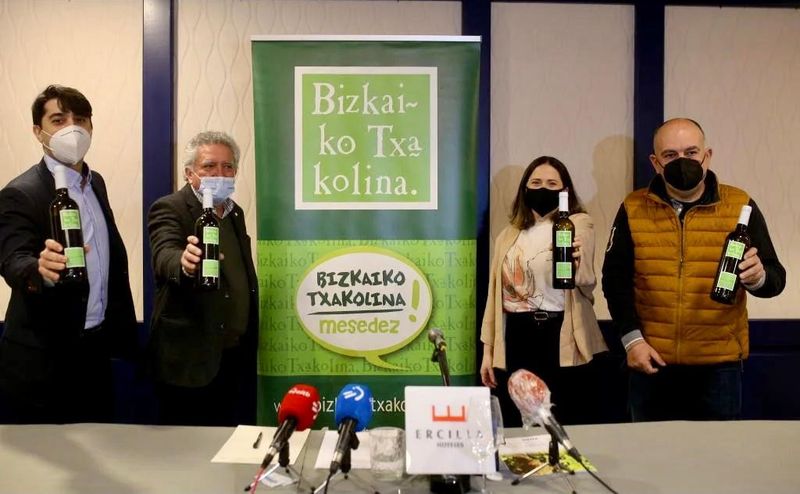 Posted at 18:09h in Sin categoría @en by bizkaikotxakolina
Share

Leioa 10-03-21. The Regulatory Council of the Denomination of Origin Bizkaiko Txakolina / Txakoli of Biscay has offered a press conference this morning in Bilbao in which it has reported the economic balance of 2020, as well as various production and marketing data of Bizkaiko Txakolina in a year totally conditioned by the Covid 19 pandemic that has taken the wineries protected by the Denomination to an extreme situation.

The President of the Regulatory Council, Jose Luis Gomez Querejeta, began his speech by recalling that “this year we cannot precisely give good news about Txakoli in Bizkaia. It is clear that in the health crisis situation we are in, problems abound in many sectors and ours, far from being an exception, is one of the most affected by this pandemic that has lasted for more than a year”.

The total closure of the HORECA channel and its subsequent opening highly conditioned by schedules, capacity and other limitations, has greatly limited Bizkaiko Txakolina´s ability to sell its product.

The hospitality industry is the main marketing channel for txakoli and although the Regulatory Council has promoted other avenues such as food storages, large supermarkets and direct sales on the internet “these resources do not compensate for the losses caused by the limitations of bars and restaurants”, said Gomez Querejeta.

The president of the Regulatory Council estimated the drop in sales by 30% “but the worst thing is that the prospects for this year are even worse if the situation does not take a radical turnaround in the short term. The wineries of Bizkaia are at the limit, and there is a lot of concern about reaching the next harvest in September with the tanks full and with no room to work with the new harvest”, he stressed.

Jose Luis Gomez Querejeta requested the decisive support of the Administration, both from the Basque Government and from the Biscay Provincial Council.

“We are aware that this COVID 19 crisis affects the whole of society and a large part of economic activity, but that is not why we can renounce to urgently request the administration for its decisive involvement, both through direct aid and by promoting support measures to the sector”.

In his opinion, the sector is in urgent need of such aid because the expenses and investments required by the farms are constant.

“Our final product, the txakoli, requires constant care in the vineyard throughout the year, as well as precise work in the winery. This work generates expenses that few wineries will be able to face if they do not obtain income since, our wineries are, in many cases, small family businesses with a limited commercial and financial structure, which makes them more vulnerable to situations such as those that we are going through, seriously jeopardizing their future and seriously threatening the very survival of our sector”, he concluded.

A SLIGHTLY HIGHER HARVEST THAN THE PREVIOUS

The member of the Regulatory Council, Aritza Antolinez Salvador, took stock of the year´s production, highlighting the slight increase in production despite all the difficulties. “In 2020 we have obtained a harvest slightly higher than last year, with a total of 1,557,344 liters of txakoli produced” he pointed out, highlighting the quality of the txakoli produced “which is obtaining excellent marks in the control tastings carried out by our Committee of Tasting”.

The 2020 harvest has not been easy at all. “We had to learn to harvest in the midst of a pandemic by implementing a harvest safey protocol, with specific plans in each winery and vineyard, where almost 1000 PCRs were carried out by the Department of Economic Development and Health”, Antolinez explained to recall that the security measures have entailed “an added cost, which has also made harvesting work more expensive”.

Aritza Antolinez also required the attention of the Administration for the Txakoli of Bizkaia. “Taking into account the existing difficulties, we are going to need support to be able to continue carrying out our work in the best possible way, in order to continue producing a wine that has become a reference for Bizkaia in the world”.

“The work of more than a quarter of a century recovering and expanding vineyards is at stake, being fundamental in maintaining the green landscape of Bizkaia and its conservation; more than twenty-five years of research in the field and in the winery, to improve our traditional wine and turn Txakoli into a wine that we are all proud of”, he continued before ending with a message of hope: “Although the sector is going through a complicated situation, from Bizkaiko Txakolina we want to send a small message of hope to society, and think that by being responsible and doing things well, we will soon be toasting with a glass of Bizkaiko Txakolina”.

THE NEW VINTAGE WILL BE PRESENTED IN APRIL

Maider Zalduondo, promotion technician of the Regulatory Council, announced that the Bizkaiko Txakolinaren Eguna, the party in which the new vintage is presented, will be held next April although in a very reduced format, due to the restrictions in force, which will that the party is very different from the traditional one.

Zalduondo regretted that the pandemic has conditioned and in many cases prevented the holding of many of the promotional events scheduled throughout the past year and announced that in 2021 “all planned activities will be periodically reviewed according to the general situation of each moment and of the particular conditions and restrictions of each community to which it directs its communication”.

The person in charge of promoting Bizkaiko Txakolina did not forget an increasingly important business aspect for the Denomination´s wineries, such as gastronomy-related tourism. “Despite the difficulties, the Regulatory Council does not renounce to continue developing the wine tourism offer of tis wineries, giving essential visibility to the quality food and wine experiences offered by various wineries, where you can enjoy gastronomy and the rural environment, complying with all safety rules”.

Finally, Zalduondo announced for this Saturday the celebration of a “round table” on txakoli and women that will take place at the Txakoli Museum, Txakolingunea, in Bakio.