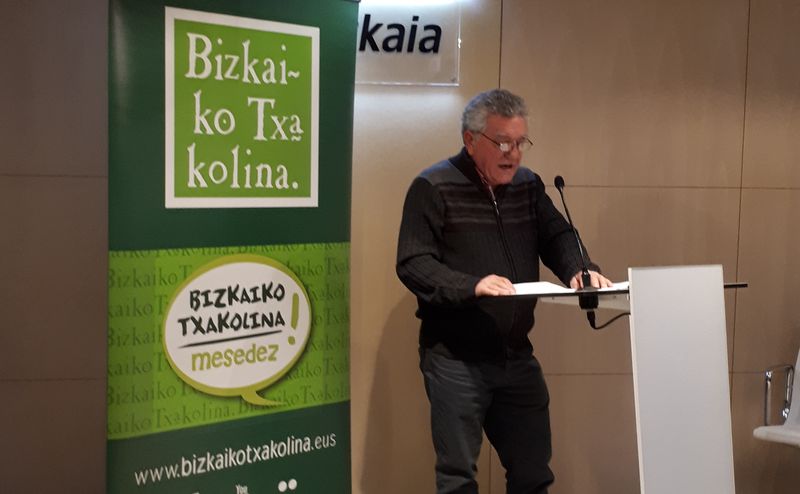 Posted at 11:15h in Sin categoría @en by bizkaikotxakolina
Share

The change in the composition of the Regulatory Council has been carried consensually among all the stakeholders of the AOC, at the end of the regulatory period of the mandate of the previous Council.

Iñaki Aretxabaleta said goodbye taking stock of the most significant milestones of his management. The outgoing chairman highlighted the production of a promotional video, the change of the back label of the AOC, the implementation of more stringent control systems, covering the entire txakoli of Biscay elaboration process, and the implementation of a new scoring procedure system, with the training of a new wine tasting committee.

José Luis Gómez, the new chairman, emphasised the projects and challenges to be faced by the Regulatory Council which has just been constituted. To continue with the improvement of controls which guarantee the authenticity of txakoli of Biscay will be one of the tasks of the new council.

To support R & D and the implementation of continuous training plans for all those involved in the process of elaborating txakoli, are other objectives which the new AOC council members hope to met.

Bizkaiko Txakolina (Txakoli of Biscay) will furthermore continue to be an AOC which is environmentally friendly, as recalled by its chairman, who reiterated his commitment to sustainable viticulture as a hallmark of the txakoli of Biscay.

The production of Bizkaiko Txakolina (Txakoli of Biscay) in 2017 was 1,593,276 litres, 12% lower as compared to the previous vintage. The weather at the last minute complicated the grape harvest and mildew and botrytis (grey mould) struck the vineyard especially in September.

This drop in production contrasts with the growth in marketing of the Bizkaiko Txakolina (Txakoli of Biscay), which in the last year has broken records with 15,183.78 hectolitres marketed, with an increase of 4.06% in the foreign market and an increase of 5.69% in the domestic market.