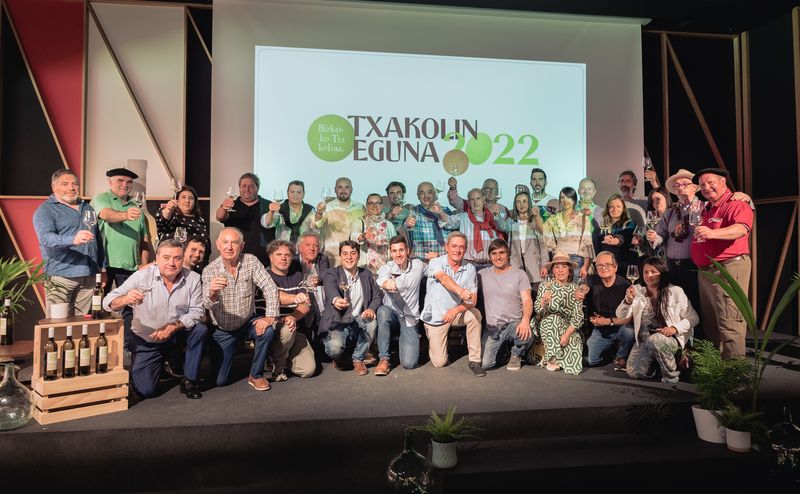 Straw yellow in color, with floral aromas and citrus notes, the Biscay txakoli from the latest vintage is very voluminous on the palate and has a floral and balsamic aftertaste, according to the sommelier at Azurmendi. “It is a great vintage, an elegant, fresh wine with great aging potential,” she concluded.

The uncorking and tasting of a bottle of Agirrebeko, from the Berroja de Muxika winery, chosen last March as the institutional txakoli for this year, culminated the festival in which winemakers, producers and professionals related to txakoli meet annually from Bizkaia to present the latest vintage to society, which this year was led by the actor Asier Hormaza.

Previously, the president of the Regulatory Council, José Luis Gómez Querejeta, highlighted in his speech the changes made to the DO Regulations to catch up with the needs of wineries and producers who are producing an increasingly wide range of txakoli . “Bizkaiko Txakolina is in a great moment. I would say that, today, the wineries attached to the DO offer the widest catalog of varieties, styles and products, as certified by the increasingly numerous labels that they offer to the consumer,” said Gómez Querejeta, also referring to the changes that have been made on the back label that comes into force with this vintage.

Bizkaiko Txakolina appointed bertsolari Nerea Ibarzabal, winner of the 2021 edition of the Bizkaia Bertsolaris Championship, as Mezulari Nagusia. In her speech, entirely in Basque, Ibarzabal linked her speech from the etymology of the word txakoli, `etxekolain’ (just for home) to extol the virtues of sustainable and environmentally friendly production.

Nerea Ibarzabal added an emotional note to the toast with an improvised bertso for the occasion.

Bizkaiko Txakolina paid tribute to José Luis Lejonagoitia, appointing him Mezulari of honor. Lejonagoitia is a student of the world of wines who, over more than forty years, has published abundant material on the origins and evolution of txakoli from Biscay. A member of the DO Tasting Committee, he has been one of the most active collaborators with Bizkaiko Txakolina since the appellation was founded.

The Mezulari de Honor took a journey from the origins of txakoli in Bizkaia to the present day, relying on various legal texts and testimonies from historians.

Those attending the event, including representatives of the Basque Government, the Deputy Minister for Agriculture, Fisheries and Agrifood Policy, Bittor Oroz, Anuska Ezkurra, Humberto Perea and Amaia Antxustegi, Deputy for Sustainability and Natural Environment of the Provincial Council of Bizkaia, They were then able to taste the entire range of txakoli, white, rosé and red in their various elaborations, in a cocktail that served to celebrate the good health of Bizkaiko Txakolina.