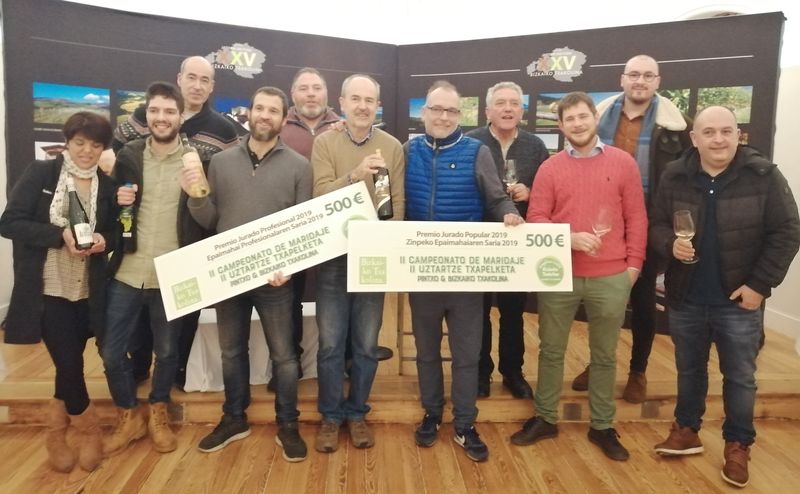 Posted at 14:05h in Sin categoría @en by bizkaikotxakolina
Share

Leioa 10-31-19 The second edition of the Pintxos with Txakoli from Bizkaia Pairing Championship in Pamplona will be held this year between 7 and 17 November. The success of the first edition of this event has resulted in an increase in participating hospitality establishments. On this occasion, 28 bars and restaurants in Pamplona and Comarca will offer their clients a pintxo created especially for the occasion, paired with a glass of Txakoli from Bizkaia, from one of the twelve wineries attached to the DO participating in the event. ; pintxo and glass of txakoli, at a price of 4 euros.

The championship values ​​the capacity of the city’s hoteliers to pair a pintxo of their own creation for the event with the characteristics of a wine as special as the Txakoli from Bizkaia.

As in the first edition, there will be two prizes: one of 500 euros awarded by a Professional Jury that will anonymously visit all the participating venues, and another, also of 500 euros, from a popular jury that will be formed by all clients who have tasted the different pairings and have deposited their scores in the polls installed for this purpose in all participating establishments. Being a popular jury will have the added prize of entering the draw for a batch of Txakoli from Bizkaia.

There will also be two second prizes in each category, consisting of batches of Txakoli from Bizkaia
The decisions of both juries will be made public on November 18, Monday, at 6:30 p.m. in the La Capilla restaurant, where the prizes will then be awarded and a tasting of the participating txakolis will be opened to all attendees.
WAREHOUSES AND PARTICIPATING ESTABLISHMENTS

The 28 participating establishments will offer txakoli from one of the twelve wineries in the DO that supply their wines. The complete relationship is as follows:

This year the Pintxos and Txakoli of Bizkaia Pairing Championship will have a previous appointment, on Monday, November 4, with the tasting offered by the DO to the Sommeliers Association of Navarra, which in this way they will have the opportunity to know in depth the characteristics and evolution of this wine over the 25 years of this DO.