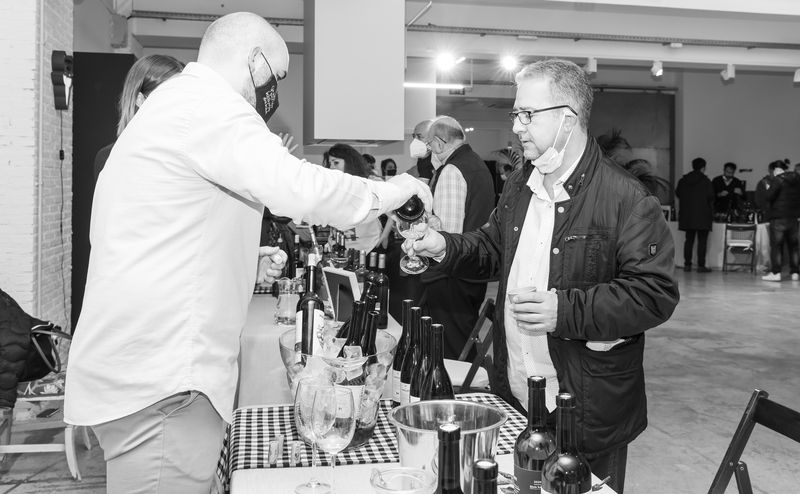 Leioa, November 20, 2021.- The Bizkaiko Txakolina Denomination of Origin gathered in Madrid the professionals of the wine sector who wanted to know the news and trends of the wineries that attended the Show held on November 18 at Espacio 23 de Madrid.

The inauguration, with the main media and some of the most renowned sommeliers and prescribers, was carried out by the Regulatory Council, represented by Maider Zalduondo, who welcomed the attendees thanking the willingness to rediscover txakoli and transmitting to the attendees the pillars on which the DO has been working in recent years: identity, evolution, union, respect for the natural environment and happiness. He invited you to visit the terroir to see first-hand the revolution that is taking place, full of energy, entrepreneurship and new techniques that have made txakolis considered among the best styles of white wine in the world.

After the presentation, a pleasant and interesting institutional tasting took place, led by sommeliers Cristina de la Calle, from Lakasa, and Iñaki Suárez, a great promoter of wine and member of the UAES, in which different styles of txakolis could be tasted: young , aged on its lees, fermented in barrels, a carbonic maceration of white grapes and a red. The tasting was supported by quality products from Bizkaia such as Bermeo World Tuna preserves, Gildas from La Gilda del Norte and DO Idiazábal cheeses.

Throughout the day, professionals from the hospitality and distribution sector, media, prescribers, students from hospitality schools, sommeliers, restaurateurs, amateurs and friends were able to get to know the txakolis of the wineries from the hand of their artisans: Berez Galanta, Berroja, Bodegas de Galdames, Doniene Gorrondona, Garena, Gorka Izaguirre, Gure Ahaleginak, Itsasmendi, Magalarte Lezama, Magalarte Zamudio and Txabarri. In the afternoon there were two experiential sessions led by sommeliers and in harmony with the products of the terroir.

The txakolis of Bizkaia have undergone a great evolution in parallel with the transformation of Bilbao, giving rise to high-quality references while maintaining the identity that characterizes them, as it was possible to enjoy in the Hall held in Madrid and in which the attendees were surprised by Bizkaiko Txakolina.

An unforgettable meeting to bring the best of Bizkaia’s txakoli, gastronomy and culture to Madrid and enjoy “All the flavor of Bizkaia in your glass”.

The DO Bizkaiko Txakolina will also be present at the XXI Hall of the Best Wines of Spain that will be held on November 22 and 23 at IFEMA. The Gorka Izagirre, Itsasmendi, Talleri Berria and Virgen de Lorea wineries will present their txakolis in the room and on Tuesday 23rd November at 1:30 p.m. the sommelier Iñaki Suarez will give the tasting entitled Bizkaiko Txakolina: Evolution and revolution of a wine with its own identity where The txakolis from eight wineries in Bizkaia will be tasted.

The new project of the Berez Galanta winery is a family winery located on a hill in the Arteta neighborhood, in the town of Galdakao.

Located at an altitude of 259m above sea level, the winery is surrounded by 12 hectares of vineyards of the native Hondarribi Zuri variety, with good orientation and aeration, mostly in a trellis system. They work the vineyard with sustainable techniques and their sheep clear the grass during the winter season and fertilize the vineyard.

The winery is equipped with state-of-the-art technology and the most modern set-up to process the grapes. Txakoli Berez Galanta is a wine aged on fine lees that enhance the aging process. With aromas of apple and stone fruit, the wine is very fresh, sweet and structured, with aging power.
Berez Galanta presented its Berez Galanta wine (aging on lees).

The Berroja winery is located in an exceptional setting. Surrounded by a 22-hectare vineyard, it is located in Muxika, in the heart of the Urdaibai Biosphere Reserve. From the winery and its vineyard, most of the Reserve and the main peaks of the mountain ranges that surround it can be seen.

The field and winery facilities are located in a 1,600 m2 building, and are equipped with modern production means that allow controlling all the production and storage parameters to achieve a high-quality product and with all the hygienic-sanitary guarantees.

The terroir on which the plantation is developed makes the organoleptic characteristics of the txakolis they produce have a marked character of authenticity and specificity.

Bodegas de Galdames works more than eight hectares of vineyard with vines of more than 10 years with the certificate of Integrated Production, more ecological and respectful production with the environment.

Its vineyards are located in the Concejuelo de Galdames neighborhood next to the great Torre de Loizaga fortress and one of the best Rolls Royce museums in the world.

They have a farmhouse in the vineyard where pairing tastings and other activities can be carried out, as well as an old flour mill in operation in the Barbadún river basin with a 15th century ironworks.

Doniene Gorrondona is made up of Andoni, Egoitz, Itziar and Julen, who without having a family tradition, in 1996 became fully involved in the wine recovery of Bakio at a time of massive abandonment of the vineyards in the area. Its objective has always been to reinterpret tradition, to produce wines with great personality without losing sight of our roots.

Doniene Gorrondona Txakolina currently has 15 hectares of vineyards in production, part owned and part leased. Its vineyards are located on the south-facing slopes of the Bakio Valley, they grow in payments with very diverse soils located in an altitude range between 0 and 250 meters. Their way of understanding the natural environment and viticulture, the autochthonous varieties and the uniqueness of the soils and microclimates of the vineyards offer as a result a great variety of young and aged wines.
Doniene Gorrondona presented its Gorrondona, Doniene and XX wines (aging on lees and vintage selection), Ondarea (barrel-fermented), Iri (sulphite-free parcellar) Beltza (red) and Aparduna (sparkling).

The Garena txakoli comes from a vineyard located in the Bizkaino municipality of Dima, which is located on the borders of two of the most important natural parks in Bizkaia, Urkiola and Gorbea. Garena wants to participate in the evolution of txakoli from Bizkaia but with its roots well anchored in our land and our culture.

The name Garena (in Spanish: What we are) wants to transfer to wine the reality of an ambitious project that combines a splendid vineyard that surrounds the Garena restaurant with a state-of-the-art winery prepared to reveal the best of its grapes. As his motto “Ginenetik garenera” conveys, his intention is to evolve towards new elaborations, which will mature alongside his vineyard.

The Gorka Izagirre Winery is a family project that was born in the vineyard and constantly evolves to achieve high-quality white wines, maintaining its identity and origin, Bizkaia, unchanged. It has 40 hectares of its own vineyard divided into 14 small plots on slopes that are oriented to the south-southeast, where they cultivate the indigenous varieties Hondarrabi Zuri, Hondarrabi Zerratia and Hondarrabi Beltza. The low yield per hectare allows an excellent maturation in order to create more structured and gastronomic txakolis, with a very interesting storage capacity.

The winery is considered a tool that works at the service of the vineyard, allowing each parcel to be elaborated separately, revealing the full potential of each one with the aim of increasing quality and creating a range of wines that is interesting for its customers.

Gure Ahaleginak is a family winery located in Orduña, a beautiful place formerly known as the Ruta de las Bodegas. The Larrabazal Durana family winery is surrounded by its own vineyards planted in 1987 and equipped with anti-frost systems for both sprinkling and aeration, since the situation of Orduña, at an altitude of 314 m in the depression formed by the riverbed del Nervión, influences its weather, sunny days not excessively hot and cool nights.

Deep soils make their vineyards produce harmonically acidic and sugary musts. It produces a full-bodied and excellent quality txakoli made with grapes from the family vineyard.

Natural, complex and full of diversity, like the Urdaibai Biosphere Reserve itself.

Itsasmendi has developed a meticulous selection of plots as an ecological basis for the winemaking practice, constituting its best heritage and hallmark: 39 hectares. of vineyards arranged in 15 plots, which provide its true character, based on the wealth existing in the natural environment. His new winery project, completed in 2020, allows those who visit him to enjoy a unique experience.

The Magalarte de Lezama winery was born 25 years ago as a result of the passion and work of a family of farmers who, to this day, have been making Txakoli in Bizkaia for more than 120 years.

The Magalarte winery is run by the fourth and fifth generation: Iñaki and Andoni Aretxabaleta, father and son, are accompanied by the family and workers in the days of intense work.

Its 11 hectares of vineyards are located in Lezama, in the heart of the Txorierri Valley. They cultivate their vines under integrated production, guaranteeing sustainable viticulture of the highest quality. The loamy-clay soils on south-facing slopes support its strains of indigenous varieties Hondarrabi Zuri and Hondarrabi zuri zerratia and other varieties such as Petit Manseng and Riesling, making wines that respect the uniqueness of these varieties.

Family winery, from the Magalarte farmhouse on the western slopes of Zamudio and with a winemaking tradition since the mid-19th century, inherited from father to son for at least 6 generations.

Today, in its new facilities located next to the Zamudio technology park, tradition and state-of-the-art technology come together. They have equipment and systems for making txakoli with avant-garde methods and new oenological techniques, always respecting the artisan tradition. They also have new plantations, at different altitudes above sea level, with excellent guidance for obtaining the highest quality grapes, from Hondarrabi zuri as the main variety.

The Magalarte Zamudio Winery has been under the Bizkaiko Txakolina denomination of origin since 1994.

Txakoli Txabarri has owned its winery in Zalla since 1995, the year in which it was decided to take part in the production of txakoli at the beginning of the Designation of Origin Bizkaiko Txakolina.

It puts quality before quantity in its production. Mix tradition with modernity to obtain a txakoli with a color, aroma, acidity and body typical of Txakoli Txabarri.

Its oldest vineyard is located in Aranguren, Zalla, where it has a perfect orientation to take advantage of all the hours of sunshine. They also work 5 hectares on the slopes of the Enkarterri Juntas house and museum located in Abellaneda, with adequate guidelines to achieve excellent quality txakoli.