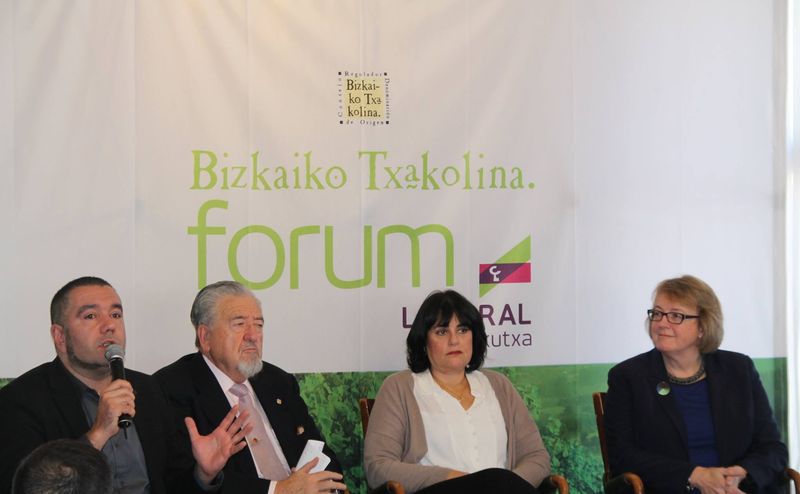 Posted at 11:41h in Sin categoría @en by bizkaikotxakolina
Share

It is a professional meeting created with the dual objective of disseminating the history of Bizkaiko Txakolina (Txakoli of Biscay) and analysing its present and future.

Moderated by Mr. Iñaki Suárez, the Euskadi (Basque Country) delegate of the Sommelier Association Union, the Forum consisted of three lectures, two given by Mr. José Luis Lejonagoitia, a historic member of the AOC Bizkaiko Txakolina (Txakoli of Biscay) Wine Tasting Committee and founder of the Bacchus wine tasting group , and of Mrs. María Olga Macías, professor of the Social Science Didactics Department of the UPV/EHU (University of the Basque Country). These two lectures addressed the historical, economic and social aspects of Bizkaiko Txakolina (Txakoli of Biscay) and its relationship with the Bilbao Social Club and Biscay. Jose Luis Lejonagoitia detailed aspects related to the history of the Txakoli, whilst Olga Macías, reviewed the role played by the txakolis of the late nineteenth and early twentieth centuries and its impact on the gastronomy of Biscay.

After the lectures, a meal was organised by the chef and wine consultant, Mr. Patxi Zabala, with a menu based on recipes which were used in the txakolis of Bilbao from the end of the nineteenth century and beginning of the 20th century, paired with various Bizkaiko Txakolina (Txakoli of Biscay) products.