Bizkaiko Txakolina steps up its commitment to quality 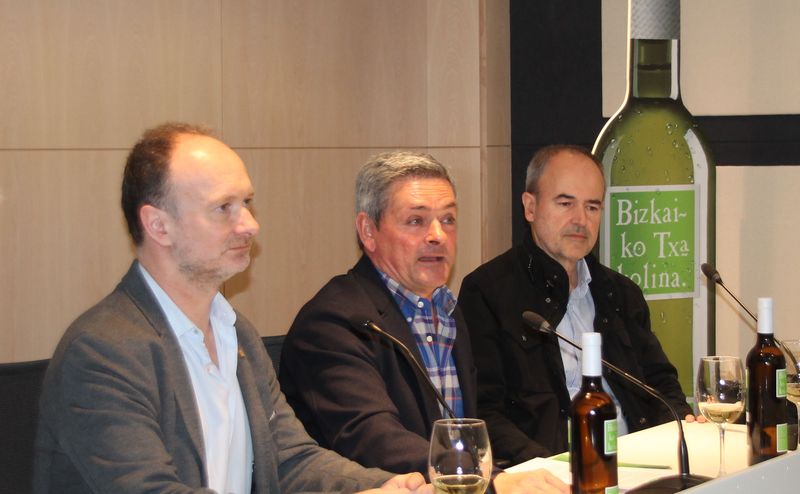 06 Feb Bizkaiko Txakolina steps up its commitment to quality

Posted at 09:42h in Sin categoría @en by bizkaikotxakolina
Share

The AOC presented the report for the 2016 financial year which recorded a production of 1,825,195 litres of txakoli

“We are a small appellation which makes a commitment to quality”, said the Chairman of the AOC Bizkaiko Txakolina (Txakoli of Biscay) in the presentation of the report for the 2016 financial year. Aretxabaleta recalled that at the request of the Appellation d’Origine Contrôlée itself, the Ministry of Agriculture only allowed a growth of 1% of the planted area, a total of four hectares. “We would like to row in a measured and sustainable manner,” said the Chairman of the AOC. . “Due to the steep geography of the territory of Biscay and a difficult climate, our production could never be high, so we continue to make a firm commitment to quality and diversity”.

The vice chairman of the Regulatory Council, José Ramón Calvo, likewise emphasised the uniqueness of the Bizkaiko Txakolina (Txakoli of Biscay). “Our commitment is to quality, diversity and exceptionality. We are talking about a wine which is elaborated with the Hondarrabi Zuri, Hondarrabi Zerratia and Hondarrabi Beltza grapes, unique in the world and only grown here.”

In this regard, it should be noted that whilst the white txakoli is still remains the principal production, reaching 98.66% of the total txakoli produced, the red txakolis have commenced to have a certain presence and attract the attention of consumers and markets, mainly foreign.

The 2016 financial year has ended with a 2.25% growth as compared to the previous harvest which signifies a new production record. This growth is due mainly to the entry into production of 75 hectares of vineyards which were planted between 2009 and 2012.

The United States, the United Kingdom, the Netherlands and Japan remain the main foreign markets of Bizkaiko Txakolina (Txakoli of Biscay) whose management do not believe that recent political developments such as the election of Donald Trump or the Brexit will have an impact on the marketing of txakoli, at least in the short and medium terms.

The Regulatory Council rendered an account of the projects carried out during the last financial year. The change of the back label was one of the innovative developments of the year. As Iñaki Aretxabaleta described, “the new back label is more modern and straightforward and which allows the consumer to see at first glance all the information about the bottle he is purchasing. In this regards, he stressed the importance of the vintage date because “when talking about txakoli we are no longer only talking about a young white wine, which is consumed during that year. We have long been producing txakolis matured on their own lees or fermented in barrels, let alone mentioning the Late Harvest txakolis, which are already having a significant presence in foreign markets. The information as regards the date on the back label is important because nowadays we elaborate complex txakolis, capable of improving with age in the bottle in four years”.

The star project of the Regulatory Council has been the change of the scoring procedure, which has culminated in the appointment of a new and enlarged wine tasting committee, comprising of 25 wine tasters, who have a new tasting notes and a method that enables a more objective and standardised scoring.

Iñaki Aretxabaleta expressed his satisfaction as, for the first time, in addition to sommeliers and oenologists, a certain number of winemakers took part in this committee, after having passed a period of theoretical and practical training and instruction on how to apply the new methods which places the AOC Bizkaiko Txakolina (Txakoli of Biscay) at the forefront of this aspect.

José Ramón Calvo described the details of the last harvest. “We had a very dry summer which caused the plants to suffer from water stress. Fortunately, the heavy rains of early September corrected the situation and the harvest returned to normal. The scoring tastings which we are carrying out at present are telling us that we will have an excellent quality txakoli”.

Finally, Iñaki Aretxabaleta congratulated the eight AOC wineries that have been awarded prizes in various national and international competitions, the 23 different brands of Bizkaiko Txakolina (Txakoli of Biscay).