Bizkaiko Txakolina presented the 2020 vintage on its Txakoli Day 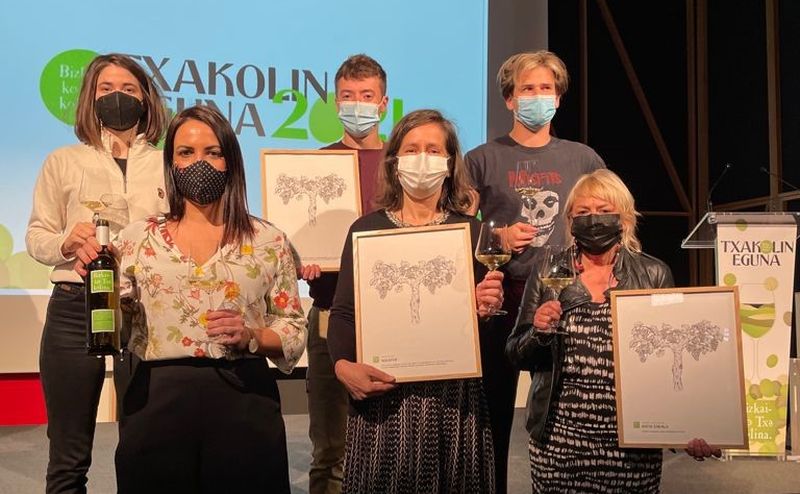 04-29-21 Leioa. Nerea Cuenco, the sommelier in charge of uncorking the 2020 vintage Bizkaiko Txakolina, described it as “a wine of high aromatic intensity, with a very pleasant attack on the palate and a long aftertaste”. This year’s txakoli from Bizkaia responds to the typical characteristics of this wine. “Very bright straw yellow in color, which on the nose evokes white fruit such as pear or apple, with a citrus background and balsamic fennel and fresh grass”.

Professionals of the environment, among winemakers and producers, had the opportunity to taste the new txakoli as the culmination of the Bizkaiko Txakolinaren Eguna that the DO held in San Mamés, following all the strict COVID protocols, which did not cloud the great annual event of Txakoli de Bizkaia.

José Luis Gómez Querejeta, president of the Regulatory Council, opened the Bizkaiko Txakolinaren Eguna lamenting the tremendous impact that the pandemic is having, to praise the great response that the producers and winemakers of the DO have been able to give. “We have seen the pace accelerate dramatically in our way of working, our communication and marketing in just one year: we adapted our work teams in harvest, with a special contingency plan against COVID, we have held tastings and training by videoconference, adapted our websites for online sales and our distribution channels to deliver orders almost immediately”.

Gómez Querejeta had a very emotional memory for two people especially dear to the world of the txakoli from Bizkaia. “I don’t want to forget about those who would undoubtedly be here today, celebrating, but who cannot and will certainly raise their glass from wherever they are. Patxi Zabala, sommelier and friend whom we also honor today, and Manu Calera, manager of the Virgen de Lorea Winery and who a few years ago held the position that I myself occupy today. We have lost two great colleagues and friends, defenders of our txakoli. Let’s continue working and enjoying our work as Manu or Patxi would have done, filling the glasses with all the flavor of Bizkaia”.

The President of the Regulatory Council closed his speech with words of encouragement for all the members of the DO and a message of hope in which he outlined some of the immediate objectives that the Regulatory Council of Bizkaiko Txakolina has set for itself. “We do something unique, we make many people happy and many choose us to share their most special moments. Thanks to all the people who go out of their way because Bizkaiko txakolina is something important in our lives. We have great and exciting challenges ahead: the adaptation of the regulation to the new styles of production of the producers of Bizkaiko Txakolina; the continuous improvement of wine tourism, betting on quality wine tourism, which shows, but also protects our land and rural areas; the transformation towards new modes of consumption without losing our identity. Challenges that we face as a collective, because teamwork is key, and more so in times like these. That is why I want to end by putting in value the effort of all those who work to transmit the message of Bizkaiko Txakolina and thank each and everyone who accompanies us on this path enormously”.

Antón Txapartegi, technical secretary of the Regulatory Council, was in charge of glossing the figure of Patxi Zabala, who was posthumously appointed mezulari of Bizkaiko Txakolina. “Today is a day in which we want to remember with all our affection and admiration a great person who abandoned us last year, and who, due to this unhappy pandemic, we had not been able to remember as we would have liked to do. I’m talking about Patxi Zabala. A person so great and special that you cannot remember him with your head, but with your heart”.

“With Patxi I learned to be more temperate, to analyze things from different points of view and try to be more inclusive,” said Txapartegi, who ended up defining Patxi Zabala as a person of vast culture, always willing to share it. “It was incredible how much he knew and how humble he was in bringing that knowledge to bear. He was a person that can never be forgotten, although he physically he is not among us. Patxi, we will always remember you”.

The President of the Council, José Luis Gómez Querejeta, then handed over to Sonia Barrondo, on behalf of Nekatur, the Basque Country Accommodation Association, and Josu, Lore and Lander, the members of the Belako music group, of the mezularis appointment of Bizkaiko Txakolina during the year 2021. The representative of Nekatur thanked the appointment and highlighted the importance of the rural accommodation network for tourism development and the image that the Community projects, while encouraging everyone to overcome these difficult times. The members of Belako also underlined the pride that comes from becoming mezularis of Txakoli de Bizkaia.

To end the event, those present raised their glasses and tasted the txakoli from the last vintage, represented by the institutional txakoli, Bitxia Berria, from the Talleri Berria winery in Morga, chosen last week by a DO tasting panel as the representative txakoli of the DO for this year.