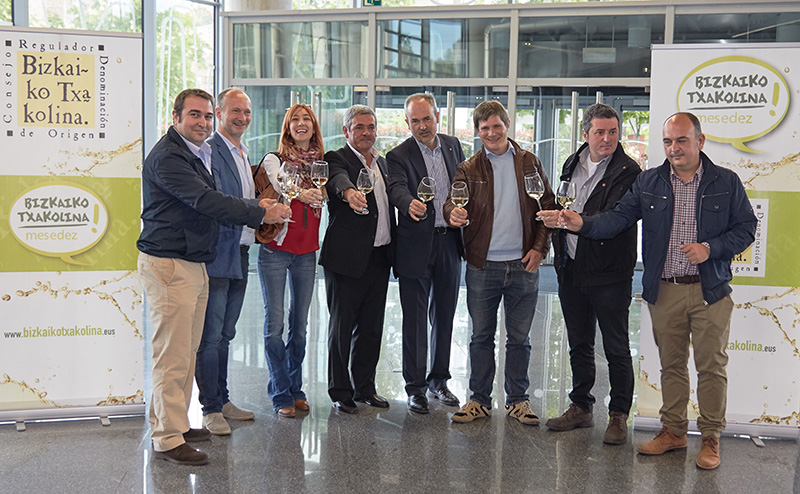 Posted at 13:23h in Sin categoría @en by bizkaikotxakolina
Share

Last April 28th the Barria drawing room of the Euskalduna Conference Centre and Concert Hall was the venue for the hosting of the 2015 edition of the Txakoli of Biscay social gathering. Vitners and producers gathered there with a crowd of friends in an ambience wonderfully enlivened by the music played by the group Arnasa. Our Chairman Iñaki Aretxabaleta welcomed all the guests and later on the Deputy Minister for Agriculture, Fisheries and Food Policy, Bittor Oroz, on behalf of the Basque Government and the Deputy General José Luis Bilbao addressed the crowd.

The sommelier of the restaurant Aizia, Itziar Ipiña on this occasion was entrusted with the responsibility of tasting the new Txakoli

Iñaki Aretxabaleta in his welcoming speech stressed the character which our Txakoli possesses as an ambassador of Biscay, which makes it the worthy recipient of all possible support by public institutions, given that, moreover, the development of Bizkaiko Txakolina (“Txakoli of Biscay”) ensures the continued existence and maintenance of employment in rural areas.

Itziar Ipiña described the Txakoli of this vintage as a clean and bright wine in appearance, of a medium to high intensity and of a yellow straw colour with green hints, having very complex aromas with herbaceous and citrus notes of grapefruit and green apple, a balanced acidity, easy to drink and very fresh.